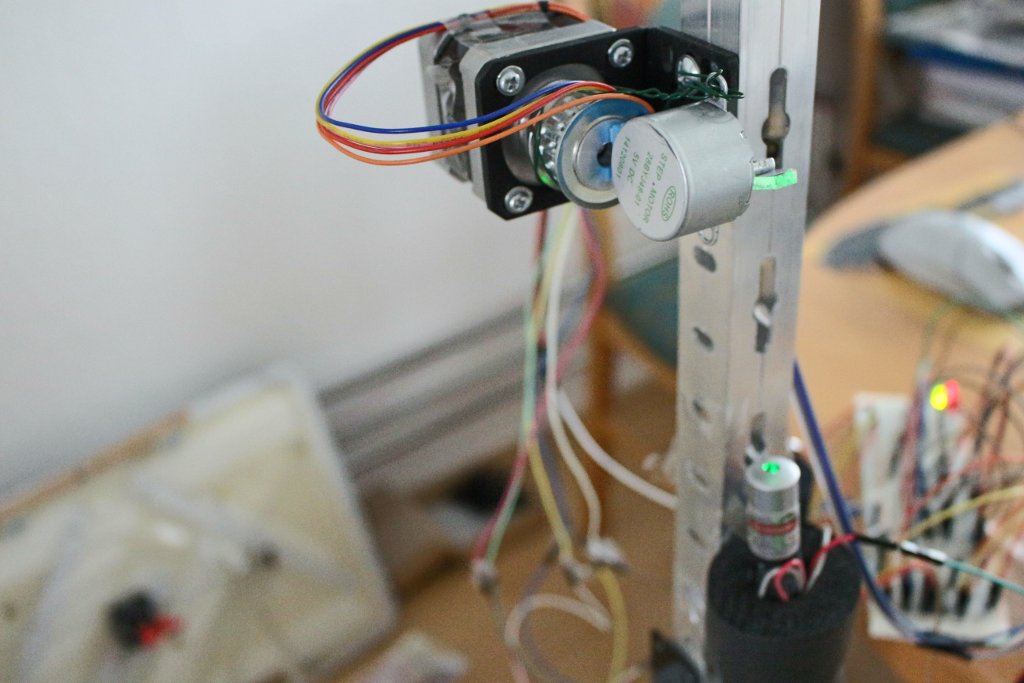 The graped piano was successful on the Maker Faire Berlin 2015

Children and grown up visitors asked me if it wouldn’t be nice to put some LED’s to the piano. If you touch a grape a LED should light up. This is a lot of additional hardware for 48 grapes and so I decided take an unconventional solution: Illuminate each grape with a laser beam when it is touched. So I build a hardware construction for a 2D laser beam prjocetion for the graped piano with 2 stepper motors, a conventional 5V  laser pointer and some buttons for moving the laser point in a square.

In this video you can see how I move the laser point from one grape to another manualy hitting a push button to move in x and y direction. Later the beam should be pointing to the grape automatically when it is being touched.

And here with a little more speed ->

Because I use 2 different stepper motors one direction (y) is very slow as the other (x) direction is nearly too fast for triggering manually.

It would pe perfect to do it the way shown in this product video from Phoenix Contact but for my little fruit piano it would be just too expensive .

Calibration test with 4 grapes: Test passed o.k.  Now it’s time to make a laser shield with 48 fibreglass connectors to the grapes. Then we make a matrix in the arduino sketch for positionng each grape. When a grape is touched, it makes a sound and is illuminated via DIY pof matrix shield 🙂

Hardware setup: Fixed the steppers on acrylic glas and connected the laser modul with a flexible part from a lighter (the black thing the laser is connected to).